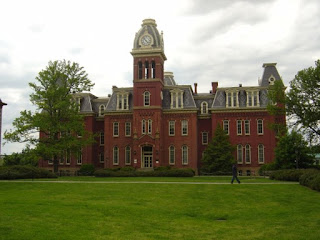 My book, Scary Ghosts and Playful Ghosts: Children’s Tales of Fright and Delight, was written to entertain children, teens and even adults with fun ghost stories. The purpose of my blog for this book also is  to entertain its readers by sharing tales of hauntings. The anecdote of a haunting of Woodburn Hall on the West Virginia University campus is an interesting one.

There are apparently several ghost stories that take place at West Virginia University in Morgantown, West Virginia.  One such story is of a ghost cow. In the early days of the school, when it was still called the Agricultural College of West Virginia, a group of students heard the saying that you can lead a cow upstairs but you can't lead it back down again. They decided to try it out, according to Theresa's Haunted History of the Tri-State. They stole a cow and took it up the steps to the building's bell tower, where it mooed like crazy. The cow would not come back down so it actually  had to be shot to death and removed in pieces. Visitors today say they hear ghostly mooing coming from the tower.
Posted by Melissa at 12:14 PM No comments: