A Trump Presidency: Scarier than the Scariest Ghost 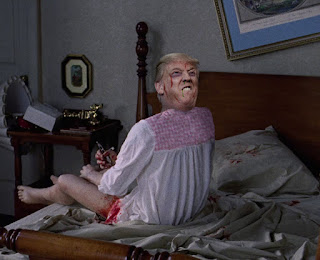 This is an unconventional post from the normal ghost story postings that traditionally appear on this ghost blog. But, with that being said, the thought of Donald Trump becoming leader of the free world is not only a nightmarish scenario, it is scarier than the scariest and most dangerous of ghosts one could ever imagine. Sometimes I think that Mr.Trump could benefit from an exorcism.

John F. Kennedy wisely said, “The ignorance of one voter in a democracy impairs the security of all.” The words of our beloved former President Kennedy, whose life was tragically taken by the assassination of a madman in 1963, are especially prophetic for the 2016 United States Presidential election. So were the words of our 16th president, Abraham Lincoln, in saying, “The only danger that America really needed to fear would come from within: If destruction is to be our lot, we must ourselves be its author and finisher. As a nation of freemen, we must live through all time, or die by suicide.”
The importance of being informed this election year and voting wisely is more important than at any other time in our country’s recent history. What is at stake is stark! I have tried to think like Trump supporters in an attempt to assess why they would support such a candidate, but I have found that task impossible and incomprehensible.
I feel that voters have a moral imperative to become more informed about the actual facts about the real Donald Trump and not just swallow his hype and attention-getting sound bytes. To do so would mean that voters should study the policy differences of both candidates and become informed about the Constitution of the United States of America - ( at least more informed about the U.S. Constitution than Donald Trump, who apparently believes it has 12 articles in it, seems to be ). It would mean reading reliable sources and viewing universally trusted and more non-partisan news media on television and radio and on the Internet rather than limiting themselves to the bias and frequent misinformation of the pundits on Fox News (an apparent favorite of Trump supporters).
Below are some actual facts about Donald Trump, based upon his own words and behavior displayed in his rallies and other public appearances. These are facts that voters need to know:
Mr. Trump’s style, personality, racism, narcissism, and insults are not patriotic, much less presidential. Such style does not lend itself to the ability to govern, to accept compromise, or to understanding the viewpoints and objectives of others. As a representative of the US, he engenders more an image of distrust, win at any cost, and selfishness.
Mr. Trump’s personal criticism of one American-born citizen and its extension to an entire population is the epitome of class racism. In addition, it reveals a basic flaw in Mr. Trump’s childish bullying practices and paranoia: the rulings that are deemed as “unfair” because he didn’t get what he wanted.

Mr. Trump’s proposal to build a wall separating Mexico “and have Mexico pay for it” promotes a first step toward isolationism, a tactic that will, without a doubt, cause harm to the US economy, citizenry and our country’s image throughout the world. His position for non-support of NATO is another step toward dangerous isolationism.

Mr. Trump  has spoken of global warming as a hoax, but seeks permits to build a(nother) wall to protect his golf course in Scotland (citing coastal erosion and a rising sea level). This is a prime example of his hypocrisy.

Mr.Trump changed his position on gun control, especially in regard to assault-type weapons. While once supporting an assault weapons ban and longer waiting periods, his recent switch is an effort to gain NRA support and paint Mrs.Clinton as one who would “abolish the Second Amendment”.

Mr.Trump made an extraordinary plea for a foreign power to continue cyber espionage against America. In Donald Trump’s own words: “Russia, if you’re listening, I hope you’re able to find the 30,000 emails that are missing,” Trump said at a press conference in Miami, Florida on Wednesday. “I think you’ll be rewarded mightily by our press!”

Many have questioned whether such a call by a presidential candidate is a crime or is treasonous. At the very least, it is a statement that makes it apparent that Mr. Trump lacks the judgment and temperament to assume the role of the president of our country.  Federal law does say that it's illegal to "counsel or induce" someone else to commit a crime, and a former federal prosecutor says Trump's statement "approaches the line."

Mr. Trump’s persistent criticism of Muslims and his suggested ban on immigration are counter to long-established values and practices that are inherent in the Constitution and in the American experience. His brash blanket statements reveal the wrong things about American character.

In the poignant appearance of Muslim lawyer Khizr Khan and his wife whose son, Humayun, an Army captain who posthumously received a Bronze Star and a Purple Heart and was buried at Arlington National Cemetery after he was killed by a suicide bomber in Iraq in 2004, is a testimony to the cruel injustice of Donald Trump’s proposed Muslim ban and his ignorance of the U.S. Constitution  and to his apparent lack of awareness of what really makes America great already.

As his wife, Ghazala, stood silently by his side, Khan held up a copy of the Constitution and asked Trump if he had ever read it and said, “You have sacrificed nothing.”

You can view, by clicking the link provided here, the heart wrenching appearance of this intelligent, patriotic, and grieving Muslim mother and father in their DNC convention appearance talking about the loss of their son and passionately addressing  Mr. Trump for his Muslim discriminatory statements.

Quoting Tony Schwartz, the ghost writer of The Art of the Deal, a man who learned a lot about Mr.Trump during his writing process, "People are dispensable and disposable in Trump’s world. If Trump is elected President, the millions of people who voted for him and believe that he represents their interests will learn what anyone who deals closely with him already knows—that he actually couldn’t care less about them."

The possibility that Donald Trump could be elected as President of the United States of America is a frightening one. If that were to happen, it would be a constitutional disaster for our democracy and a catastrophe for our country’s  freedoms, safety and security. I am paraphrasing the Democratic candidate, Hillary Clinton, when she stated that the fact that anyone who can be baited with a Tweet has no business anywhere near the nuclear codes. And to think that, as a nominee of the Republican Party, Donald Trump will soon be given, as is traditional, National Intelligence Security briefings! These are all the types of thoughts that keep me awake at night.

Note: My various blogs are, not only meant to be informative for various types of reading audiences on various subjects, but are also intended to be promotional and lend public exposure to my published books.

I am the author of three award-winning children's books that aim to advocate for the well-being, education, and entertainment of children. The books include What Would You Do? A Kid's Guide to Staying Safe in a World Strangers (published by Headline Books, Inc.), Scary Ghosts and Playful Ghosts: Children's Tales of Fright and Delight (published by Crimson Cloak Publishing), and The Bully and the Booger Baby: A Cautionary Tale (published by Write Solution Ink).

Readers may also access book information, as well as useful information and resources that advocate for the education, well-being and entertainment of children by visiting my book website, Melissa Harker Ridenour Books.

Purchase information for these books can be accessed via my Amazon Author Page.