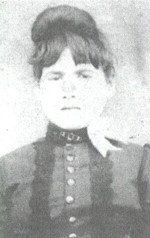 In keeping with the ghostly theme of my new children’s book, Scary Ghosts and Playful Ghosts: Children’s Tales of Fright and Delight, published by Crimson Cloak Publishing and available in both print and Kindle formats on Amazon, and in print and Nook through Barnes & Noble, and through Books-a-Million, as well, I enjoy posting occasional famous ghost anecdotes on my book’s blog. I think you will find this one fascinating.

If you have ever been to the Greenbrier Inn in White Sulphur Springs, West Virginia, you will immediately find yourself immersed, not only in its magnificent grandeur and beauty, but also in its history. Many people don’t know, however, that the Greenbrier has one of West Virginia’s most famous ghosts as a spirit resident.

She is Zona Heaster Shue,  better known as the Greenbrier Ghost. Ms Shue was killed by her husband, Edward. The man initially covered up Zona’s death by dressing her body himself and not allowing a coroner to get a close look at her. Her cause of death was at first ruled “everlasting faint” and then “childbirth.”

Not long after her burial, Zona’s ghost appeared to her mother and told her that Edward had killed her. The mother was eventually able convince the prosecutor of this, and he had her body exhumed. When they looked more closely at the body, they found that her neck was broken and her windpipe crushed. Edward was eventually found guilty of Zona’s murder and sent to prison. Supposedly Zona Heaster Shue’s restless spirit has roamed the beautiful halls and rooms of the Greenbrier ever since. R.I.P Zona.