Trans-Allegheny Asylum: One of the Ten Most Haunted Places in West Virginia 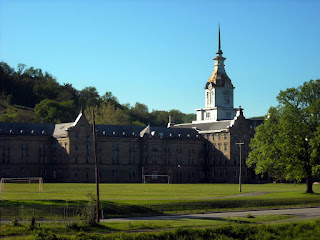 When Virginians decided to rid themselves of their “insane,” they determined that moving them west of the Alleghenies would prove the best solution. So the Trans-Allegheny Lunatic Asylum, was built in Weston, WV between 1858-81 and was soon known as one of the largest and most fantastic hand-cut stone masonry buildings in the United States..

The psychologically troubled who were admitted to the asylum over the years of operation brought with them a plethora disturbing energies, according to parapsychologists. Today the facility, which became the
Weston State Hospita, has become a museum as well as a destination for seekers of haunted places.

Purportedly, according to rumor from the locals in the area, the asylum is haunted with the souls of the insane who passed there. Many people who were admitted to the asylum were admitted there for reasons as benign as laziness, overly-religious zeal, women’s emotional troubles exacerbated by menstrual cycles, birth control, and superstition.

The asylum was intended to house about 250 people but the population there peaked in the 1950s with over 2,400 patients. In 1994, the asylum was forced to close and has never been reopened as a mental facility. However, they offer regular tours, haunted tours, and a haunted house in the fall.
Posted by Melissa at 3:08 PM No comments: